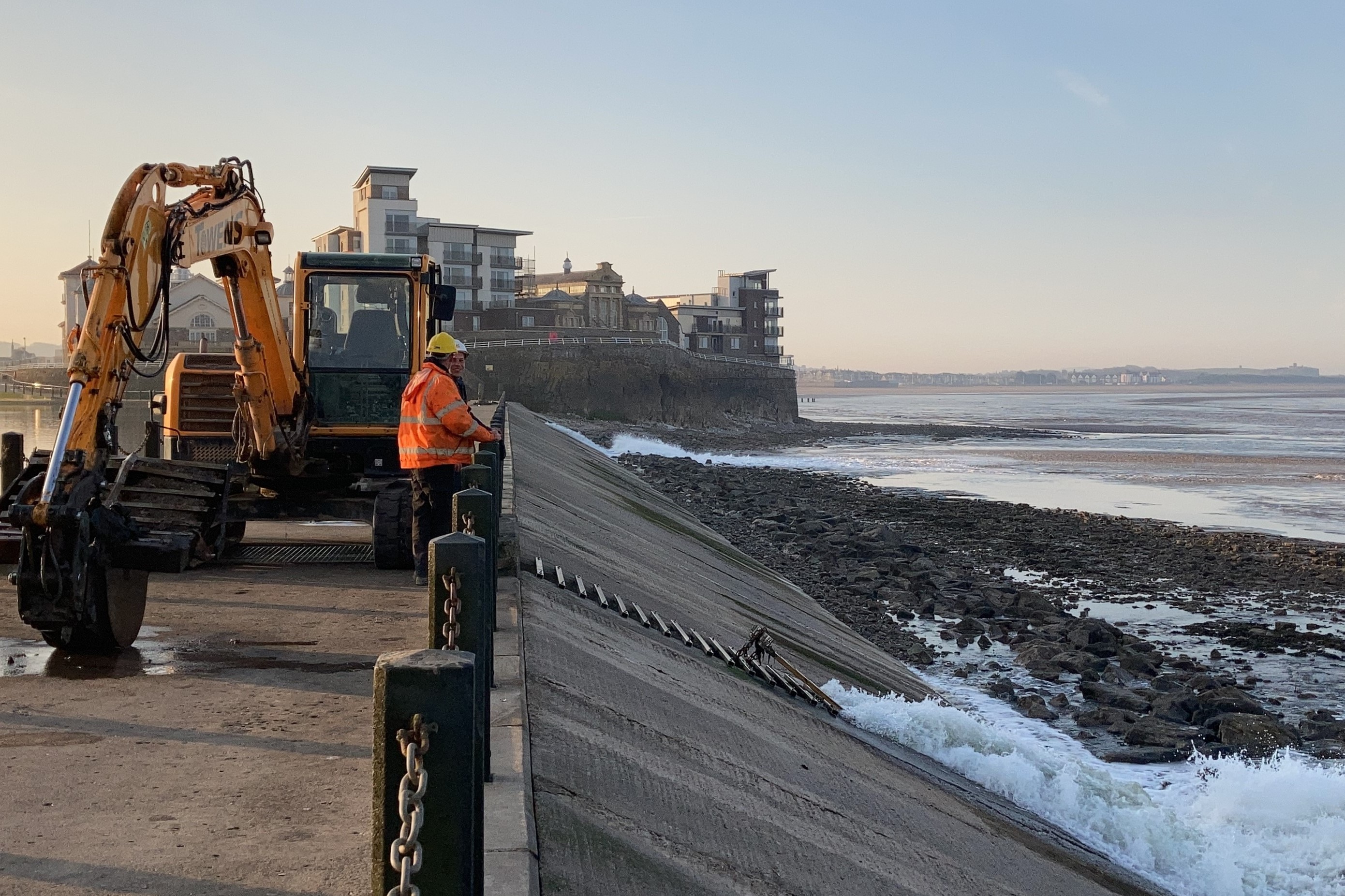 Plans to rejuvenate and restore Weston’s Marine Lake moved forward this week with preparatory works undertaken ahead of the weekend’s high spring tides.

North Somerset Council has pledged to invest £300,000 to bring the lake back into use as a community hub for watersports and has developed a plan to harness the energy of the season’s high tides to naturally ‘flush out’ as much of the lake’s compacted silt as possible.

On Tuesday morning the lake’s two faulty sluice gates were removed to allow the lake to fully drain. This Friday, diggers will churn up the deep layers of silt alongside the causeway to ensure the weekend’s high tides have the maximum impact on flushing out remaining silt.

Natural tidal flushing at Marine Lake will last for around eight weeks, depending on weather conditions. During these works, the lake and causeway are temporarily closed to the public to protect their safety.

Cllr Mike Solomon, executive member for neighbourhood and community services, said: “We’re really pleased to be able to get work underway at Marine Lake while we wait for a licence to mechanically remove built-up silt.

“A few people have asked why we’re doing this work now, and there are several reasons. This weekend is the first of three periods of very high spring tides, so we can maximise the use of tidal energy during this eight-week closure of the lake.

“We want to minimise the disruption caused by the works, but we also want to get the work started so the improvements are in place as soon as possible.

“We have Natural England’s approval for carrying out the natural tidal flushing during spring, which would not have been the case had we delayed until after the summer due to the number of migrating birds in the area. Marine works in the winter are also more difficult and costly because of storms and unpredictable conditions.

“I am grateful to Cllr John Crockford-Hawley for the hard work he has done to make this happen and his ongoing support.”

North Somerset Council is working closely with newly-established Community Interest Company Weston Marine Lake Mudlarks on the possible longterm maintenance and finance arrangements for the restored lake. Claire Trevor-Roper, one of the directors of the Mudlarks, said: “The Mudlarks team is delighted that a combination of budget being approved, increased daylight hours out of storm season and very high tides has allowed the first phase of drainage work to go ahead this spring.

“Our army of volunteers look forward to working with the council on this exciting project to create a safer sea-swimming venue right on Weston’s seafront.”

The council has applied to the government’s Marine Management Organisation for a licence to mechanically remove silt from the lake. Cllr Solomon added: “It will take around 13 weeks for our licence to be granted. The more silt we can remove naturally in the meantime, the less need there’ll be for costly mechanical removal later in the year. This means more of the budget can instead be spent on new facilities and enhancements.”

North Somerset Council’s investment in Weston’s Marine Lake is part of a £700,000 Great Lakes project which will involve work to revitalise Clevedon and Portishead's coastal lakes too.

The plans for Marine Lake are also included within the adopted placemaking strategy for Weston town centre, which includes a set of themes and ambitions for the town around wellbeing, recreation, being green, low carbon, a great place to live work and study and helping the local economy adjust to the fundamental changes accelerated by coronavirus.

To get involved with Weston Mudlarks go to westonmarinelake.co.uk.